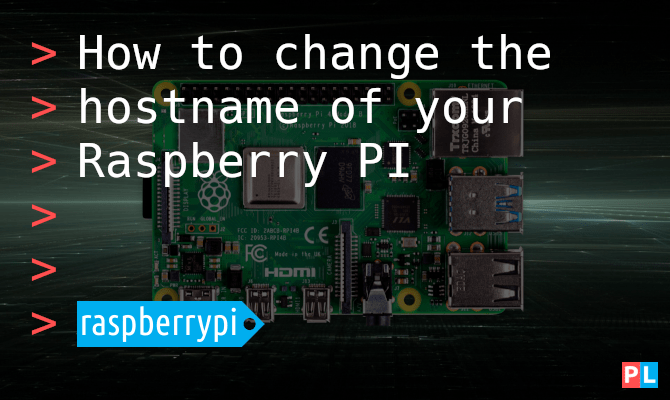 What is a hostname?

The hostname of your Raspberry PI, or any Linux system for that matter, is pretty much just a name. The hostname:

Have a look at the following image for an explanation of how the terms hostname, domainname and FQDN relate:

Think of the hostname as your system’s first name and the domainname as its last name. Friends, such other systems on your local network, can address the system by its first name. Unknown systems, such as those on the public Internet, need to use a more formal approach. They need to use both its first and last name, so the fully qualified domain name.

After installing the Raspberry PI operating system, its default hostname is set to raspberrypi and no domainname is configured. When remotely connecting to your Raspberry PI via SSH, from another system on your local network, you can therefore conveniently run command:

Instead of having the figure out and specifying its IP address:

Why and when should you change the hostname?

Why would you want to change the hostname? If it’s the only Raspberry PI on your local network, then the default raspberrypi hostname works fine. You would only need to change it out of personal preference.

The goal of this article is to show you how you can change the hostname of your Raspberry PI. We’ll cover a few different approaches. For example purposes, we’ll change the Raspberry PI hostname from the default raspberrypi to mypi. You can of course change this to whatever you want. Just keep in mind that the hostname can only have valid characters from a to z and digits from 0 to 9. A hyphen - is allowed, as long as the hostname doesn’t start with a hyphen.

What do you need?

To complete the steps in this article, you need a Raspberry PI. Ideally, one where you already installed the Raspberry PI operating system on. Which type of Raspberry PI doesn’t matter. You can have a keyboard, mouse and display attached to it, or remotely log in to it via SSH. That’s up to you.

For this article I decided on using my Raspberry PI Zero W. I installed the Lite edition of the Raspberry PI operating system, as explained in the tutorial about how to perform a minimal install on your Raspberry PI. I’ll use SSH to remotely connect to it.

Change the hostname with the Raspberry PI Imager

Starting with version 1.6 of the Raspberry PI Imager software, you can access an advanced options screen. It’s a bit hidden. To access it, press the CTRL+SHIFT+x combination on your keyboard. On the dialog that appears, you can configure the hostname for your Raspberry PI:

After making this change, you continue as usual by clicking the Write button on the user interface. This writes the Raspberry PI operating system to the SD card. Upon first booting your Raspberry PI from your SD card, a shell script gets automatically executed to configure the settings you made on the advanced options screen. This include the hostname change for your Raspberry PI.

Open up the terminal on your Raspberry PI. Either directly or by remotely connecting to it via SSH. Next, start raspi-config by running this command:

From the menu, select: System Options and then Hostname. On the next dialog, you can enter a new hostname. I entered mypi:

Once you changed the hostname, close the raspi-config program, by selecting the Finish option on the main screen. The program asks you, if you want to reboot. Go ahead an select Yes, because the hostname change will not activate until your reboot your Raspberry PI.

Using the raspi-config program in non-interactive mode, offers an alternative and quicker method. Simply open up the terminal and run the following command:

Just don’t forget to manually initiate a reboot, for the hostname change to take effect:

The previously described methods for changing your Raspberry PI’s hostname, essentially do the exact same thing under the hood. They change the hostname in the following two files:

Therefore you can also simply edit these files manually to change the hostname. I personally prefer this method, because it also works on other Linux distributions such as Debian and Ubuntu.

With the Nano text editor

This file only contains the hostname itself, so simply change it right there. Once done, close the file and save the changes (CTRL+x):

One down, one to go. Continue by opening up the /etc/hosts file with Nano:

Replace all occurrences of the old hostname with the new hostname. Afterwards, close the file and save the changes:

That’s all. Just don’t forget to reboot your Raspberry PI, for the hostname change to take effect:

Instead of editing the /etc/hostname and /etc/hosts file with Nano, you can also change the hostname directly with terminal commands. It’s quicker and you could even turn it into a shell script for automation purposes.

We need to perform the same edit operation on both files: Search for the old hostname raspberrypi and replace it with the new hostname mypi. The sed program is perfect for this. Run the following two commands:

Don’t forget to reboot your Raspberry PI, for the hostname change to take effect:

Verify the hostname change on your Raspberry PI

How do you check that the hostname change was successful? Well, if you are working directly on the Raspberry PI, just open up the terminal. Its command prompt should now read [email protected] instead of [email protected].

Similar in case you connect to your Raspberry PI remotely, with the help of SSH. Just make sure you specify the new hostname in the ssh command:

This article presented a few different solutions for changing the hostname of your Raspberry PI:

Use whichever solution you prefer. They all yield the same results. My personal preference goes out to manually editing the /etc/hostname and /etc/hosts files. Simply because this is how you would achieve this task on other Linux distributions as well. Show the Git branch in your Bash terminal prompt CAN communication on the Raspberry PI with SocketCAN Create and extract a TAR GZ archive in Linux